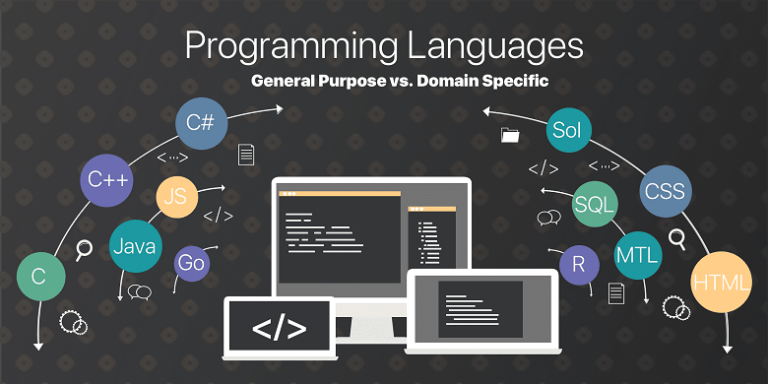 Blockchain is expected to cross a whopping 19 billion U.S. Dollars by 2024, says Statista. With such a lucrative market and the potential to revolutionize diverse business industry verticals, blockchain is a compelling industry for investment. One must be aware of the top blockchain programming languages for competitive advantage.

The technology stack rules a significant aspect of any development project. The right language, frameworks, and an ideal set of tools lead the project to success in no time. However, much like the early days of the internet, it’s still in infancy, and development occurs rapidly.

Thus, it is necessary to choose an ideal language while leading any development project. You might be surprised to learn, but most programming languages like Python, Java, JavaScript, etc., are good options for Blockchain development. Here is a quick question for you:

Do You Know the Top Development Languages? 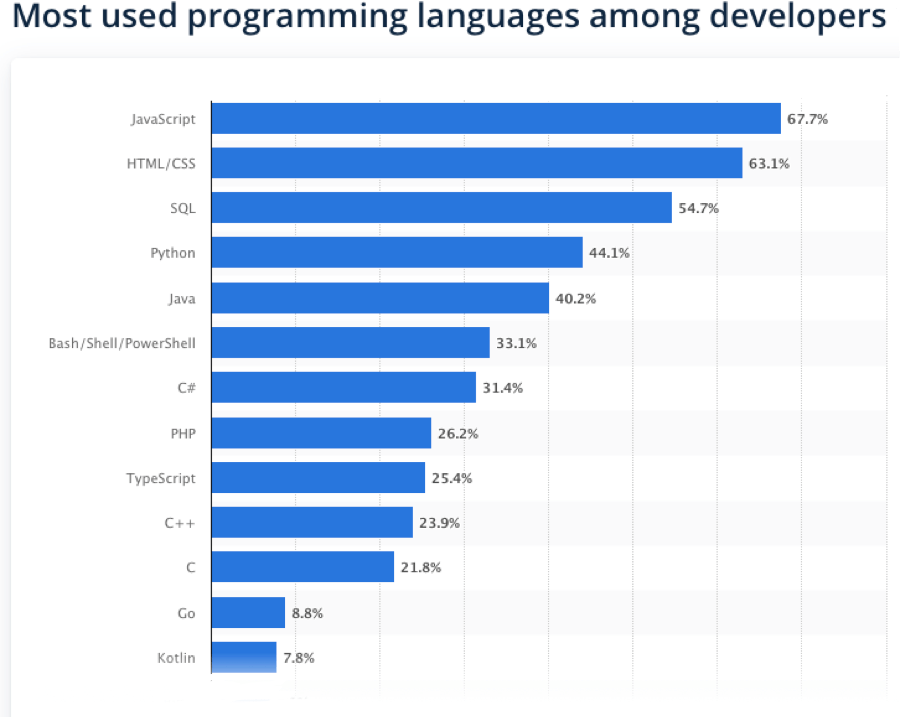 Based on these factors, the top blockchain programming languages include the following:

Let’s explore them in detail.

Solidity is a contract-oriented, high-level language for implementing smart contracts. It was influenced by C++, Python, and JavaScript and is designed to target the Ethereum Virtual Machine (EVM). Solidity is syntactically similar to JavaScript, and it is easy to learn. Thus, you can start developing a test network using just MetaMask.

Moreover, contracts written in Solidity have access to things like web3.js functions, Oraclize and Etherscan APIs. On top of that, there are some helpful libraries such as OpenZeppelin or ERC20 Token Standard Interface package and other testing frameworks for Ethereum development such as Truffle or TestRPC, etc.

Python is a high-level, interpreted language with an extensive library of open source modules and one of the fastest implementation speeds. Moreover, it is versatile enough to support development for both web and mobile. Diverse industry verticals use it.

The infographic below offers insights into industries that prefer Python as a programming language: 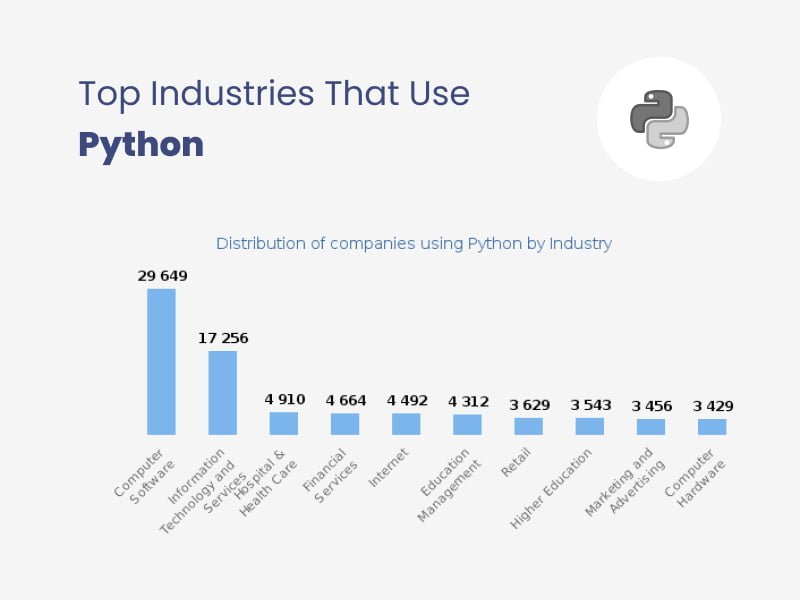 Its use cases include everything from game development to server-side scripting. Moreover, it’s got a vast community surrounding it. So, if you’re stuck on a problem, the odds are good that someone else has already encountered and solved it.

JavaScript is a lightweight, object-oriented language used to create potent web applications. In addition to being used to create simple websites, you can also use JavaScript to build graphical user interfaces (GUIs) & complex data models.

Programmers have started using JavaScript to develop apps because it allows them to be written entirely in code. As it gets used on many sites on the internet, users with any browser can run them without needing special plugins or software downloads, unlike programs built using Flash technology.

Moreover, because of its broad compatibility with other programming languages, including Java and C++. Despite not being designed specifically for blockchain development at inception, it’s one of the topmost recommended resources today.

In fact, Douglas Crockford, a notable American programmer, says, “JavaScript is the only language that I’m aware of that people feel they don’t need to learn before they start using it.”

Go is one of the most popular blockchain programming languages with minimal syntax. Google initially developed it but became an open-source project forked under multiple organizations. It has been used for different purposes but is currently a top choice for developers because of its simple nature. It makes it easy to pick up if you have never programmed before, especially learning Solidity and Ethereum development.

Many first-time Ethereum developers choose Go as their first programming language because they believe it will make them more marketable. Employers want workers with coding skills and other technical experience that developers can apply to blockchain projects. On top of being user-friendly, Go is also fast and scalable, making it ideal for enterprise applications.

Ruby is a renowned scripting language created by Yukihiro Matsumoto, also known as Matz, in 1995. It got released in 2004 and is commonly used to create websites or applications using a database-driven approach. The initial version of Ruby came with only one data type – strings; however, many versions later, it supports arrays & hashes.

Moreover, ruby facilitates Ethereum based projects effectively. Ethereum has an actively maintained developer tooling environment with many IDEs & third-party integrations available, too. Thus making building DApps easier than ever before.

Blockchains are secure by design, and C++ is a safe language. It is a popular language choice for development in diverse industry verticals, including aviation & aerospace, telecommunication, automation, etc. Thus, users trust C++ compilers to use low-level code for security-critical applications, such as operating systems and browsers.

The infographic below offers insights into the popularity of C++ among diverse enterprises: 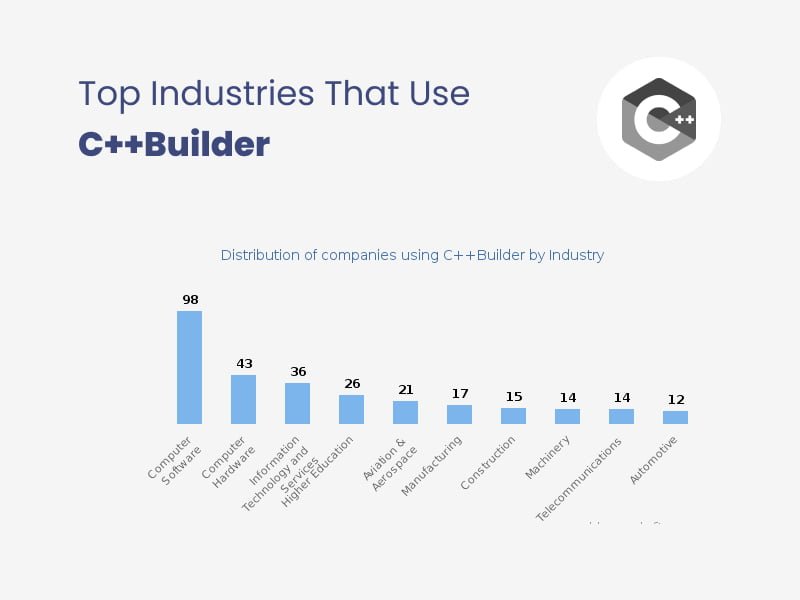 With deterministic compilation and formal specifications of all language elements, developers can ensure that a program compiled with a particular version of GCC behaves as intended.

Microsoft’s C# language is already popular among many enterprises. It gives C# developers all the tools they need to create applications on top of any distributed ledger system. With Visual Studio, Microsoft introduced a blockchain development toolkit.

Read More:- The Top 5 Technologies For Your Business in 2022

The combination of excellent developer support and enterprise-ready application design could make C# a superb fit for enterprise blockchains. While it is not as well-known as some other offerings on this list, it’s undoubtedly a serious contender for consideration when thinking about building your next app using blockchains. Moreover, some banks are already using C# to develop permissioned chains.

Vyper syntax has been inspired by Python and Smalltalk and like Solidity. The notable ones include static type checking, which means you get an error in your code right away rather than later when there is a compilation error. It also supports contracts, decentralized applications, and other benefits over Solidity.

Also, it offers more consistent pointers compared to Solidity. One drawback is that it is not currently supported on all Ethereum nodes, although support for Vyper has already been implemented into Metropolis on the test net. It should come out soon enough, given time.

Rholang has been considered suitable for developing smart contracts, especially private blockchains. It is because Rholang has first-class support for state variables and visibility predicates. For example, you could update a variable with a! Symbol.

Learn More:- Hiring Dedicated Developers Simplified Than Ever Before

Besides, since every node stores state separately from every other node, each process in Rholang processes happens independently on each machine by default. In simple words, there is hardly any need to consider serialization of any kind if you don’t want to. It means anything that needs to be serialized can do so using its own internal data structures and message passing mechanisms.

Due to its robust code and flexible development, diverse industry verticals prefer Java. It’s useful for large projects and works best when combined with other technologies. Thus, if you are trying a versatile tool that developers can use for different applications as your project grows and expands; Java could be an excellent choice. In fact, Java is the preferred language choice for development in the United States.

The infographic below offers insights into the popularity of Java in nations worldwide: 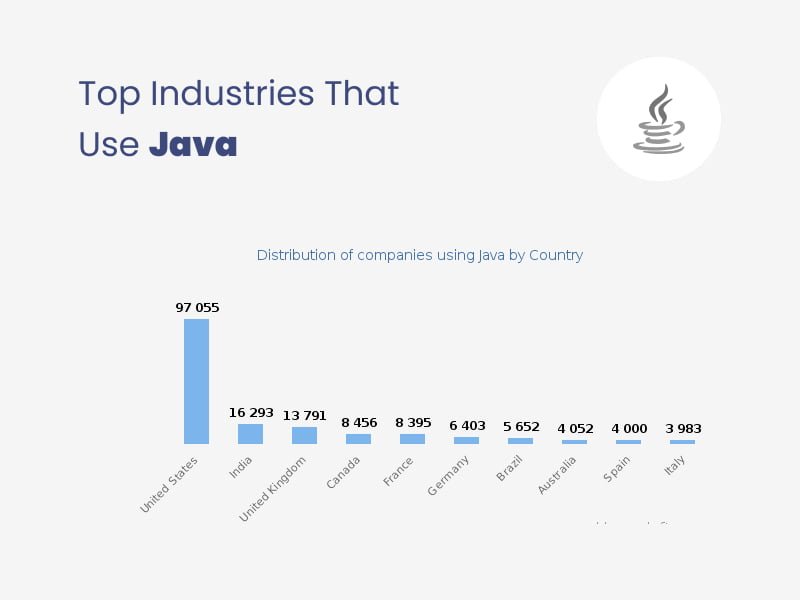 It’s useful for large projects and works best when combined with other technologies. Thus, if you are trying a versatile tool that developers can use for many different applications as your project grows and expands; Java could be an excellent choice.

In conclusion, after reviewing these different blockchain programming languages, we have made a top 10 list based on their current use, adoption, and future potential. Moreover, Python is the most renowned language because it is easy and ideal for beginners.

Solidity is another renowned language because it is an excellent intermediate step between JavaScript and C++ or Java. C++ has always been a famous blockchain language but will soon pass by newer languages like Vyper.

However, the best language for your blockchain project depends upon its type. Whether you are building a smart contract or another crypto coin will primarily affect the language choice.

Moreover, the best blockchain software development company in India can help you identify the most compatible blockchain programming languages based on the business needs and requirements.