Hiring Dedicated Developers Simplified Than Ever Before 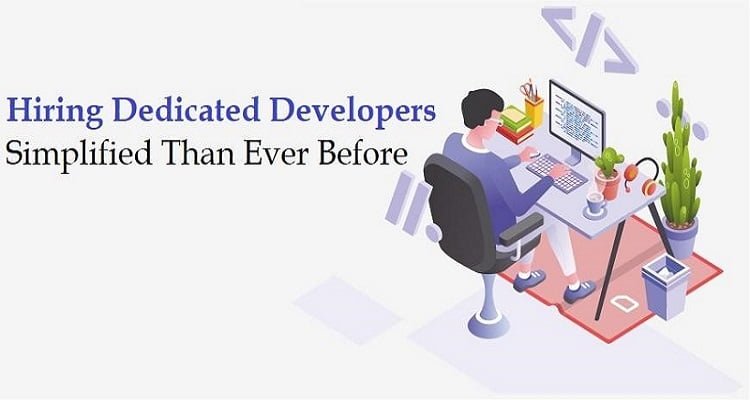 Dedicated developers get hired for particular projects during which they work for an extended period, working on a full-time basis. The work environment decides which kind of developer needs to be appointed for a particular project.

Why should dedicated developers get hired?

Dedicated developers help to save costs for software, web, or mobile development projects. These developers have experienced skills and resources. Thus, making their work cost-effective and ensuring that the work would get done on time.

As dedicated developers are freelancers, they have flexible work hours and pricing. The developers can connect with the enterprise via online modes on a daily or weekly reporting basis.

The companies won’t need to spend money or time on training these developers as trainees or employees in their company. These developers mostly get hired when companies urgently need professionals or need to fill a gap in their team. This makes it easier for the developers to work for a certain period and not have to be appointed as long-term employees.

The process of hiring dedicated developers

Even though there is no need for training or expenditure on the developers, the market for IT has become quite busy. Developers are up for grabs, and the companies need to hire people suitable for their projects.

The very first step is to clarify the expectations that the company has from the developer. The required skills, qualifications, monetary expectations, experience, and the work that will get assigned. Everything should be discussed before appointing a developer.

The next step is to find vendors to review the process. Every project has a different need, and thus companies should hire developers who can follow the work. The employers can ask for the portfolio of the developer to understand his/her field of expertise and knowledge. The vendors in this process will provide brochures and information packs.

Is it smart to hire an offshore remote developer team?

As the software industry is booming every day, the resources to cover the work are not available. In this case, companies tend to opt for offshore remote developer teams that can perform the work assigned to the developers.

Hiring offshore developers were quite common before, but after the recent conditions of the pandemic, the hiring of developers who live halfway across the world has increased. IT companies in the US and UK often try to appoint developers from third world countries. Like India as the expenses in their monetary value would be much cheaper.

India is already considered the hub for skilled developers. As the IT industry keeps on growing in this country, offshore companies want to hire developers from different nations in order to fill their developer teams.

Even though the price point is quite low when it comes to offshore developers. And this saves a lot of money for the companies, the working conditions and environment of the developers should be spoken about. The needs of the developer should be considered and then hired.

As the market for developers is increasing, outsourcing has become a new norm for offshore developers. By outsourcing, development teams get qualified professionals, large talent pools, and quality-oriented solutions.

Some of the ways to hire offshore developers are:

If the budget of a business project is limited, then freelance sites should be referred. There are bunches of online portals where the job requirements can be posted, and the interested enterprise can connect with the developers. Some of the online portals are:

There are several directories of firms where offshore companies are listed. These directories help to bring together software developers. While looking for a suitable developer, the enterprise can peek into the profile of the developer to ensure that the developer matches their requirements.

Even though there has been a lot of buzz about tech in society, there is a subsequent lack of developers to handle the workload of ongoing projects that the enterprises come out with.

Scouting developers for offshore marketplaces make it easier for the enterprises to hire them for a short time and then move on to some other developer for a different project. Not only does it save money, but it also ensures that the skills of people from all over the world are used.

Using tech to get in touch with the tech community:

Rather than using old methods of having vacancies in jobs and sourcing developers in local areas; outsourcing of developers is now done by getting in contact via posting about job openings on social platforms. Sites like LinkedIn, Quora, and Forums are the best ways to post about tech developers who want to be a part of a functional enterprise.

Getting in touch via local consultant:

As the rush for developers keeps on increasing, local consultants work as the middle man between employers and employees in order to navigate them in the right direction. The enterprises can come in contact with a suitable developer via this consultant.

What are outsourcing software development services?

Outsourcing means getting certain work done by delegating certain tasks to an external vendor instead of assigning it to in-house IT staff members. Also, outsourcing is faster and more cost-effective as a professional team can work together with the best developers, and a project can be run without the need of them coming and sitting in an office.

Outsourcing is mainly done in order to fill the gaps that a company has regarding its IT team. Outsourcing software development services ensure that there is no need for micromanagement as some of the most talented and skilled developers are appointed.

Micromanagement in these enterprises is unnecessary as every step of a project is well divided amongst different teams.  The project manager must keep getting updates every once in a while about the progress after a certain work gets assigned to the outsourced developers.

They have access to proper knowledge and experience about different projects and fields. This helps the developers to have effective communication with the team.