Which is Better For Your Business: A Native or Hybrid Mobile App? 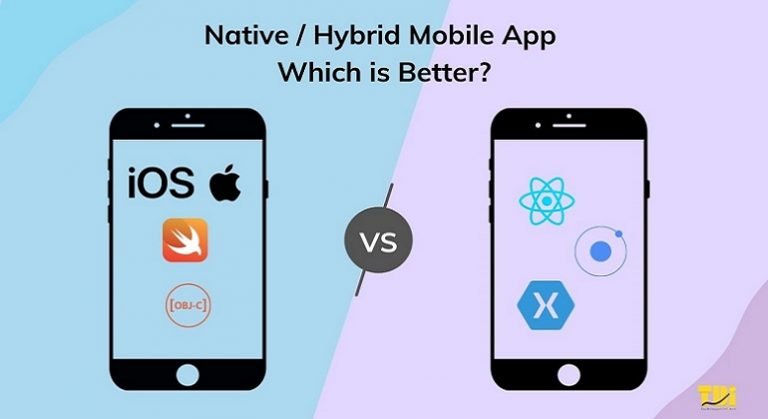 Mobile apps are quickly gaining traction and have emerged as the most powerful tool in which all businesses must invest. We now have applications for everything, including online food, pharmaceuticals, clothing, and everything else! As a result, business owners have learned that investing in mobile app development is critical to staying ahead of the competition and meeting the demands of their customers.

You can swiftly increase your business by providing iOS mobile app development services that match your ideas and aims. So, what’s the next thing that comes to mind? Whether you should hire an iOS developer or not. However, it is a decision between native or hybrid apps.

Hybrid and native app development methodologies, like any other technology, have their own set of benefits and drawbacks. Furthermore, today’s customers want smooth, secure software with a plethora of customizable options. Moreover, it is what businesses must achieve.

This article consists of a comparison and contrast of hybrid and native app development on the basis of performance, security, app updates, and UI/UX interfaces.

What is the Purpose of Native App Development?

A native mobile app is a developed software to run on a particular platform or technology. It uses gadget-specific tools and programming because it is created for a specific smartphone and operating system. On the other hand, Native apps are built to work with several frameworks, have better performance, and take advantage of new technology.

Native mobile apps are efficient and quick to deploy. They allow users to be more engaged while also giving access to the whole Native (UI) design and controls. To get one, communicate with an iPhone app development company.

Developing native apps for Android and iOS necessitates the use of distinct platforms. So, we will go over the technical stack that requires you to hire an iOS developer or company for iPhone app development.

Swift is Apple’s newest programming language, and it outperforms Objective C. It also surpasses Objective-C in terms of performance. The experts use Swift in new apps because of its intuitive features and user interface.

The following are some examples of Native apps:

What is the Purpose of Hybrid App Development?

Do you know what hybrid platform uses to create native and web-based components? Hybrid software makes use of Cascading Style Sheets, JavaScript, and Hypertext Markup Language. Moreover, Hybrid apps get access to all smartphone functionalities via APIs.

Although native applications can be downloaded and run offline, there are no cross-platform applications available. However, a Hybrid app is hosted on a web app. Therefore, it works likewise as a web app.

The three most common frameworks for developing hybrid apps:

Facebook, the social media behemoth, launches this cross-platform campaign. It has an explicit user interface, outstanding performance, and a short development time.

Microsoft supports this open-source framework. Because it’s so simple to update, it’s the best choice for vital applications. When it comes to business tasks, it is usually the most renowned option.

Comparison between Native and Hybrid Apps

Below is the comparison between Native and Hybrid Apps based on performance, user experience, and security:

Native apps are created specifically for a single operating system. However, these apps use storage and memory while simultaneously delivering high performance. However, adding new functionality to an application built using the Hybrid Framework takes time.

So, Hybrid development is not the most excellent alternative for you when your business requires complicated functionality and features. Therefore, why not take help from the iPhone mobile app development company.

Native apps are created exclusively for an app store and provide the best user experience. They categorize the apps on the basis of screen size, hardware capabilities, and other factors. Moreover, there is only one code base for each OS. So, you cannot obtain a better user experience than with Hybrid apps.

Speed is another area where native apps have a slight advantage. Native apps use the device’s native language. Perhaps, this could cause the application’s reaction time to slow down.

Do you know that speed is the main factor? A hybrid app may be slower and stutter more than a native app. So, think about it before you hire an iOS developer to work on your dream app.

Critics of Hybrids point to SSL configuration and Javascript injection as issues. Moreover, they also rely on plugins, which add an extra layer of code to detect any security flaws. Without the usage of plugins, native apps use security features natively. They also employ security elements more directly, simplifying and streamlining their deployment.

Finally, for security applications that require a high level of detail, native programming may be the best option. So, it is better to hire an iOS developer to maintain the security of your native app.

So, which technology should you engage for your project if you want to hire an iOS developer? As previously said, both Hybrid and Native app development have their own set of advantages and disadvantages. They are appropriate for users with specific requirements.