Why Should Startups Choose React Native Apps Over Hybrid Apps? 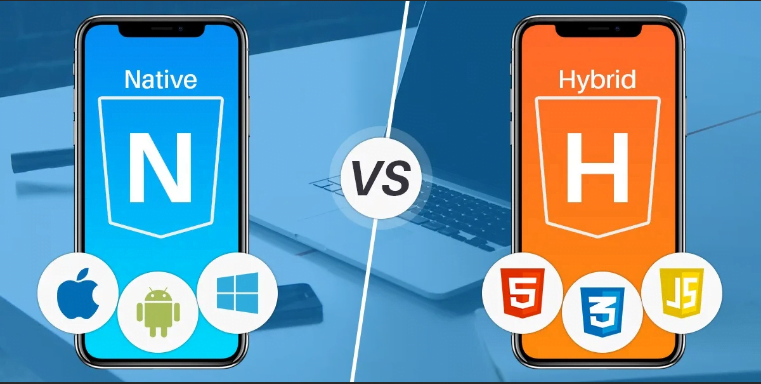 The inception of a new business is a multi-faceted journey that is exceptionally demanding and equally daunting. The checklist seems endless, from concretizing an idea to roping in people and arranging finances. Among the lost list of tasks, selecting the right technology stack and the type of mobile application is fundamental for any startup.

If done right, a mobile app can be an absolute game-changer for an upcoming business, fetching audience connectivity; more leads, increasing conversions, and much more. When it comes to mobile applications for startups, we cannot ignore the discussion around React Native apps versus Hybrid apps.

The discussion has been going on since 2015 when React Native started becoming mainstream. The crux of the discussion is not about the higher efficiency of one platform over the other; but rather which platform is more suited for startups’ business requirements.

Now, let us break down the discussion and get to its core.

Hybrid Apps for Startup Apps – Are they Viable?

A group of experts opines that hybrid apps are faster and more inexpensive as they involve web developers rather than native mobile app developers. This group appreciates the less temporal investment associated with hybrid apps. It asserts the possibility of creating a brand for business on all mobile devices in a short period without creating multiple code versions.

Some of the primordial benefits of opting for a hybrid app by companies are:

With all the mind-blowing merits, it is crucial to examine the feasibility of hybrid apps, especially when it comes to the needs of startups. There are several pressing problems associated with hybrid apps, and let us gauge out a few of them below.

Facebook extended its JavaScript libraries to support the Android platform after seeing massive success for iOS apps. Now, developers can use a single codebase for iOS and Android, and the same libraries offer mobile User Interfaces through React Native. It is noteworthy to highlight that a single codebase saves time and resources for developers who can devise an app without compromising quality.

One of the most outstanding values of React Native is that it uses the same platform that the native iOS or Android app languages utilize. On the contrary, Hybrid apps are mere web views bound in a native container that behaves like a web app.

3) The Use of ReactJS Programming Language

At its core, React Native is a JavaScript framework that shares a programming model with the world-renowned ReactJS web language. The conceptual framework co-opted to develop ReactjS web apps can also create React Native apps. Thus, an app requires only one developer instead of three. The cost-savings and time savings with react Native is phenomenal.

Some of the top apps of contemporary times are based on React Native. In the React Native, apps versus Hybrid apps debate, one of the strongholds of the former is that various top-class apps such as Facebook, Walmart, Tesla, and Instagram are all premised on React native.

React Native uses building squares, which are reusable local segments that are together in locales. The elements developers typically use in Android and IOS are already present in React Native to ensure consistency in look and functioning.

Since its inception in 2015, React Native has attained rapid awareness and interest among the developer community. React Native is an enriching open-source ecosystem for external integration and shared knowledge. Thus, it has become the market leader in the new generation of cross-platform app development.

7) React Native is Analogous to an Intuitive User Interface

As compared to JavaScript frameworks like React or Angular, React Native is more exclusive to mobile. Thus, the resulting UI of the React Native application development is responsive and fluid, courtesy of the JavaScript connections present in the native environment.

A rudimentary benefit of opting for React Native app development by startups is the presence of several third-party integrations. Thus, startups do not solely depend on Web View for performance functions.

React Native concentrates on constructing a mobile User Interface. Thus, it appears more like a JavaScript framework than a JavaScript library. The asynchronous JavaScript functions in an absolutely native environment, building flexible and highly responsive mobile UI with seamless interaction.

The WebView portion utilized to create Hybrid mobile apps has become redundant. React Native app developers are currently looking to make blocks with the reusable ‘native components’ that can be aggregated to the native applications.

Moreover, React Native has counterparts of the components and elements utilized in IOS and Android application development. Therefore, designers can create a reliable look, speed, and fundamental functionalities of the native mobile application.

There are 6.3 billion smartphone users globally, and 80 percent of their screen time is spent on a mobile app. Therefore, the significance of mobile applications is at an all-time high. These gigantic statistics imply that startups need to manifest their business idea into an app and seriously take its performance.

Therefore, the key for a startup is to choose a platform that provides their app with innovative functionality. A comparison between React Native apps and Hybrid apps reveals that the latter is way behind the former in terms of performance. Hybrid apps introduce an additional layer between the source code and the targeted mobile platform, which leads to a performance decline.

2. Absence of 3D Support and Graphics

With 1.96 million apps in the Apple App for download and 2.87 million apps in the Google Play Store, people’s expectation has reached new levels. Hence, it becomes essential to use 3D components and eye-catching graphic designs to catch up. Hybrid apps do not support attractive illustrations and 3D.

If you want 3D support with hybrid applications, you will have to go the extra mile by taking help from third-party tools like Unity 3D.

As discussed before, hybrid apps introduce an additive layer between the source code and the targeted mobile platform. This step not only reduces performance but also creates challenges in debugging. Mobile app developers have to depend on the framework and play around with the targeted operating systems hoping that no new bugs are introduced in the app.

The primary purpose of the sign-in and creating an account feature of apps is to gather crucial data. However, in hybrids, you might struggle to collect and utilize performance metrics that could help your application improve. Moreover, adding a sign-in screen every time a user opens or loads your application is a sure-shot way to reduce engagement and increase bounce rates.

With the mobile application industry about to touch a global revenue of USD 935 Billion by 2023, it is imperative for startups to step up their game by including new features now and then. Startups should fully use all the upcoming software potentials and feature sets.

Unfortunately, one of the most veritable disadvantages of Hybrid apps vis-a-vis Reacts Native apps is that it is a big challenge to add new features in the Hybrid framework.

Therefore, it would not be erroneous to assert that Hybrid apps are not the ideal cup of tea for startup apps. The key pillars that a startup’s app should have include performance, ease, cost-effectiveness, and innovation. Opting for the React Native framework can be a foolproof way for startups to launch their apps and accelerate their business goals.

Thus, React Native is a promising and advantageous cross-platform tool for building mobile applications. React Native apps are infused with a high degree of code reusability across platforms. They come with a massive library of third-party integrations and robust and efficient platform development.