What is the Role of AI in Software Development in 2022? 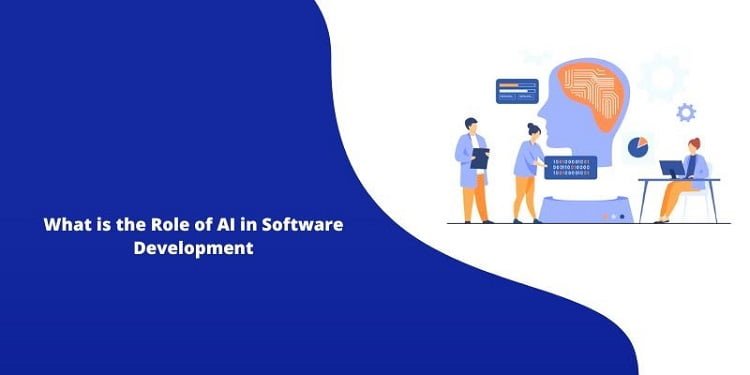 Artificial intelligence, or AI, is ubiquitous in modern technology, from self-driving cars to supercomputers and digital assistants to industrial robots. Its possible applications are only increasing in number, as is the sophistication of AI tech itself. Top software developers are also not lagging in deploying AI technology in their field of work.

These tools can be used to harness the power of AI for software development, from automating rote processes like sending emails and alerts to carrying out advanced analytics on big data and automatically generating code. Moreover, the applications of AI in software development are endless.

What is the Role of AI in Software Development?

AI tech is currently used to carry out requirement analysis, as it can more effectively identify errors or absent elements in the user stories and requirements.

At the same time, machine learning allows it to learn nuance and context, so over time, it becomes capable of detecting more subtle errors. Moreover, the issues are unique to the specific context of your projects.

One of the most tedious and cumbersome parts of software development is how to start coding for a huge project. At least partially, automating the code generation process will go a long way toward saving time and money for developers. AI tools trained on large amounts of pre-existing code can then generate code based on a text description of what that piece of code is intended to do.

One of the more prominent automated code generators is CodeT5. Developed by researchers at Salesforce and trained on more than 8 million pieces of code obtained from publicly available GitHub repositories.

Important:- What, Why, And How To Use Artificial Intelligence in Marketing?

Moreover, it can not only generate code based on a text description but complete an entire code function after being given the target function name and create a normal language summary of a given code function.

Another such platform is OpenAI Codex: based on OpenAI’s own GPT-3 natural language generator, this open-source platform can write code in over a dozen languages, including JavaScript, Perl, PHP, and Ruby.

Leveraging AI in software testing services results in improved accuracy, more comprehensive coverage, and reduced labor, time, and money costs. Whenever any code changes are made, certain sets of tests need to be carried out all over again. So, manually doing it would be unfeasible; automating such repetitive processes is a boon for software developers.

The most thoroughly trained AI testing platforms can detect changes to the software by inspecting history logs and comparing them to outcomes, identify whether such a change is a bug or a newly added feature, prioritize test cases, carry out testing on the run to enable fast and continuous deployment, and predict possible bugs in coding and testing.

Selenium is an example of a popular open-source test automation tool. Capable of functioning on any operating system, it is used mainly to automate the testing of web browsers. Moreover, developers can perform the tests at any time from any device. Other popular AI-powered testing platforms include Google OSS-Fuzz, Percy by BrowserStack, and UIPath Test Suite.

The introduction of AI into this particular phase of software development has increased the efficiency of deployment control cycles. AI-powered deployment control tools are already wildly popular amongst the developer community. More importantly, a 2020 survey by ZDNet found that 61% of IT managers reported that AI had already majorly influenced software deployment methodologies.

AI platforms can provide data-driven insights to identify the appropriate deployment time and rollout rate. Moreover, monitor the deployment process to predict hardware or system failures. The identification and removal of unused/problematic features can also be automated. All of this will add up to scalable and efficient workflows.

Kubeflow by Kubernetes and TensorFlow by Google are two of the prominent AI-assisted deployment control tools presently in use.

Cybersecurity is a field where there has been prolific use of AI technology. Software development is no exception to this trend. Addressing any security threats to your product is a crucial part of the post-deployment phase for any developer. A major challenge for security is simply getting through all the data.

More importantly, more than half the IT security professionals contacted in a 2021 survey by Trend Micro revealed they felt overwhelmed by the number of alerts they had to address. AI platforms can churn through data much faster than any human.

Moreover, they use anomaly detection algorithms while analyzing the large volumes of data collected from the customer end to detect irregularities in behavior that can point to potential security threats by eliminating false positives and creating a hierarchy of threats.

Artificial intelligence in software development is here to stay; it increases the speed and scale of development, reduces errors, and provides data-driven insights.

Furthermore, tools allow developers to make better decisions. The human element in software development will by no means be replaced entirely, but AI will act as a powerful complement and amplifier to human skills.

We hope you enjoyed this article on the role of AI in software development!