What To Eat Or Not To Eat – The Complete Ekadashi Guide 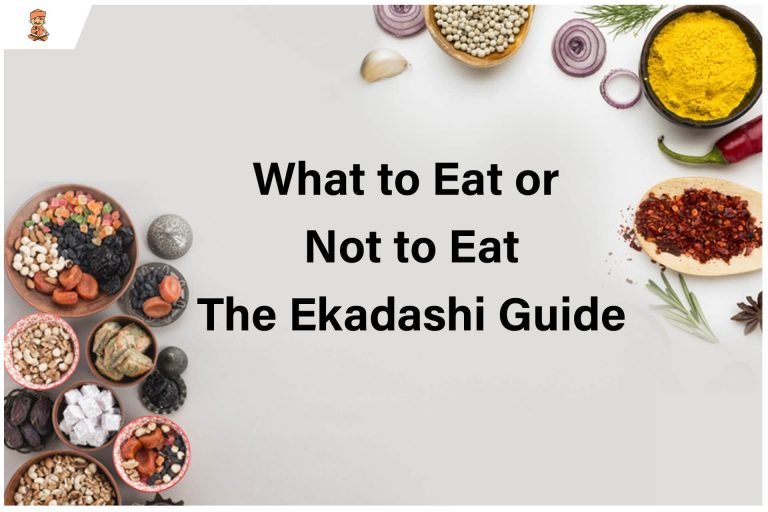 What is Ekadashi – The Significance of Ekadashi

To fundamentally understand what Ekadashi is and learn its significance, we need to know what the word means. It is quite simple. The word “Ekadashi” is Sanskrit for eleven (Ek=one + dashi=10).

Here, eleven quite simply refers to the eleventh day of the lunar cycle. The two fortnights tracking the moon as it goes from the waxing to the waning phases. It may sound insignificant when phrased like that. After all, what is special about it? It is just a random day in the lunar cycle!

However, wait for those who are educated about it! Might be laughing since they are well aware that the sacred text. The divine Bhagwat Geeta, tells us about the day when Lord Krishna narrates. The importance of the Ekadashi fast and the ways of carrying it out on this sacred day.

When do we observe?

Deva Uthani Ekadashi is a festival devoted to Lord Visnu, celebrated on the 11th day of the year’s lunar cycle. It is the first fortnight between the Amavasya and the Purnima. This ritual has its roots in quite literally waking up Lord Vishnu. Deva Uthani means “Waking up the lord.” Its translations across languages like Sanskrit evoke the meaning of awakening as well.

The story behind the celebration of this festival is quite interesting. According to Vedic astrology predictions, Lord Vishnu was so dedicated to blessing his devotees. They completing his duty of destroying all evil that he did not sleep. He spent all his time staying awake, completing his duties towards those he blessed, a diligent lord.

This gradually took a toll on him. Even though he did his best. This lack of sleep had many adverse effects on him, one of which was destroying his sleep cycle. Lord Vishnu succumbed and fell into a deep sleep that lasted many years.

This arrangement was not optimal for the other Gods and Goddesses. These irregular sleep patterns were proving detrimental to his Consort, Goddess Lakshmi. She wanted Lord Vishnu to have a regular sleep schedule so she too could subsequently rest reliably.

Vishnu realized the error of his ways. They saw that his erratic sleeping pattern of staying awake for years on end. Then going into a deep sleep where he was unavailable to everyone could not go on.

A compromise was made as the noble lord decided to sleep four months a year. Thus solving the problem and keeping Goddess Lakshmi happy. While at the same time completing his duty towards his devotees and keeping all evil at bay, which was his obligation.

According to holy books and scriptures, the grand Ekadashi Fast spans for three days. The preparation for the occasion starts from the day before itself. On the day of Dashmi, the tenth day of the lunar cycle (this one is probably more famous due to Vijay Dashmi or Dussehra that occurs later in the year), during the afternoon.

Devotees who want to fast have one last meal to start afresh with a fast the next day. Each day, the devotee keeps a stringent Ekadashi Vrat. They give up all food and water for the day.

Ekadashi food list includes fruits, vegetables, and sometimes milk products, depending on the situation of their mental or physical well-being or their willpower. These also apply if the devotee has any medical situations, which prohibit a complete fast.

This fast is gradually broken in the evening and then started again for the next day. This cycle lasts for 3 days, marking the end of this test and healthy exercise for the devotees.

The Benefits of Fasting

It is believed since time immemorial, understandably so with evidence; that the various functions of the body affect by the sheer magnetic pull the moon has on the Earth. Why would not it be so?

The moon influences so much on this earth; its pull is so strong as to be the foundation of the entire tide system. Fast Ekadashi food builds a natural flow of fluid in the body and helps maintain good health.

It also works on the mental health front by giving peace of mind and invokes happiness and devotion due to the nature of the festival. Learn more about the benefits from Suvich – The real astrology.

The main diet followed during Ekadashi is Phalahar- literally meaning, “fruit meals.” The main component of this diet is pretty obviously fruit and fruit juices.

Other items that can consume on this auspicious day are milk, fruit juices, foodstuffs like sabudana, and much more!

Some commonly Ekadashi food to eat during this period are sugar cane, sweet potatoes, and sugar beet. The entire world of fruits is also yours to explore with citrus fruits like oranges, tangerines, and lime juices.

You can also take Apple juice and bananas, which are good sources of nutrition during this time. Sugarcane is important since the festival coincides with the season of sugarcane harvest.

Take care that in the spirit of fasting, any food you have is light and easy to digest. Astrologers will help you with fasting techniques.

So that one gets the benefits of fasting discussed above as well as the feeling of satisfaction after the sheer amount of willpower it takes to perform a successful fast. It will surely give you and your family spiritual peace after the final pooja is complete.

Ekadashi restricted food is onion, garlic, salt, and grain. Meat is to be especially avoided of all types since heavy food drags down the body’s metabolic functions, which are not ideal during a fast.

Rice is a grain that was especially avoided in mythology since being unable to live without fancy grain was seen as a symbol of vanity and greed. The position of the moon at this time also complements having light food, and thus having heavy foods can be detrimental.

We hope this proved educational on the food restrictions during Ekadashi. Happy celebrations!