Street Foods On The Ionian Islands – You Must Try! 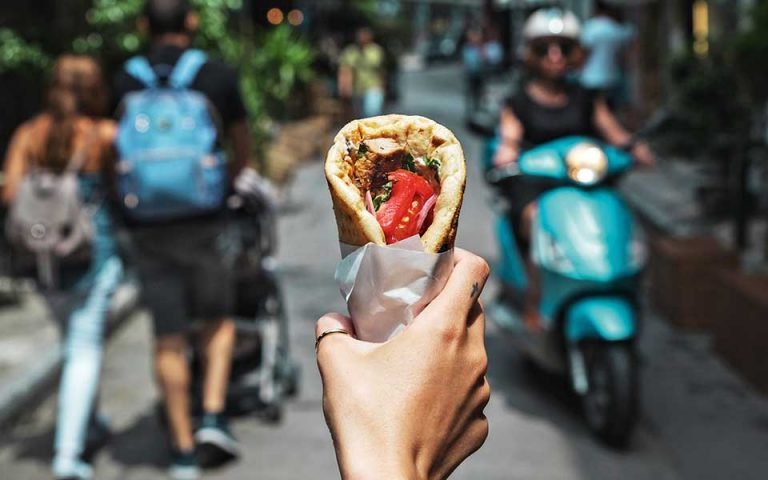 One of Greece’s delights is its cuisine. With influences from Turkish, Persian, Levantine, and Byzantine cuisines, the Greeks can extract the best flavors from the already great ingredients at their disposal. The Ionian Islands are no exception to this. It may be the best region if you want to try Greek street foods.

With a climate perfect for outdoor dining and a few dishes that can prepare on the barbecue or in street stalls, a visit to Greece is an excellent opportunity to try Greek street foods. This article will focus on easy meals and snacks that form the basis of Greek cuisine. In other words: “street food.”

Where to get street foods on the Ionian Islands?

The Ionian Islands may not have the street foods culture prevalent in South-East Asia, but it does have a lot of taverns and snack bars with outdoor terraces. Alternatively, you can grab food to go from bakeries and the bigger supermarkets.

Food truck festivals like in Athens haven’t found their way to the Ionian Islands yet, but there are other festivals and weekly markets where you can fill your belly with Greek delicacies.

As a general rule, the bigger or the touristy the town you are in, the greater your chances of coming across anything that resembles street foods. As for the Ionian, the region would mean Argostoli on Kefalonia, Kerkyra on Corfu, Zakynthos on the eponymous island, and Gaios on Paxos.

The Ionian Islands offer you unique opportunities to try food not sold back home in your country. So why not take advantage of your visit to Greece and try some of these delectable dishes? Greek street foods are a tasty and convenient dinner choice.

Pronounced “yee-ros,” this is one of the most famous Greek dishes. Gyros is thinly slicing, stacking meat on a vertical spit that turns around past a grill. The Greek version of the Turkish kebab, if you will. After placing your order, the meat is shaved off and placed in pita bread with salad, fries, and tzatziki sauce. At most places, you can have this Greek snack for under five euros!

Spanakopita is a spinach pie. Its other ingredients are feta cheese, dill, and lemon juice. Together with spinach, these wrap in phyllo pastry. Spanakopita can eat as a snack or appetizer and is for sale at bakeries and taverns.

The legend is that this dish originated when the Turks about 400 years ago occupied Greece. An almost identical dish in Turkish cuisine is similarly named ispanaki. Farmers like to carry them in their pockets for lunch.

Souvlaki is dicing chicken, beef, pork, or lamb meat on skewers. The meat is marinated in olive oil with lemon juice and herbs like cumin, thyme, coriander, and oregano, giving its typical Greek taste.

You May Also Like:- What To Eat Or Not To Eat – The Complete Ekadashi Guide

This food is not served in pita bread but on a plate instead and is accompanied by salad. In ancient times, souvlaki did include bread (and also cheese). Souvlaki is a diminutive of the word souvla, which means skewer.

Pastitsio is baked pasta. This dish, which resembles Italian lasagna, actually originated in the Ionian region. Layers of pasta intersperse with meat cooked in a tomato and wine sauce. The top layer of pastitsio is béchamel sauce.

Rich in carbohydrates and calories, this dish is the perfect fuel for professional athletes. Anyone else who eats pastitsio will probably have a scare the next time they step on the scale.

This meat pie is made with the same flaky phyllo pastry that uses for spanakopita. It contains ground meat –usually lamb or – and sometimes leeks, rice, and feta cheese. Kreatopita can have as a starter or eaten as a light meal. It is also suitable as a grab-and-go lunch.

Tiropita is a cheese pie. It contains feta, olive oil, and eggs, and phyllo pastry. It comes in different sizes and can shape any way the chef likes, for example, in the shape of a mollusk shell. Tiropita is popular as a breakfast snack or even as a light meal. You can find it at bakeries all over Greece.

Many countries claim to have invented falafel. And the fact is that these vegetarian ‘meatballs’ probably didn’t originate in Greece. But then again, who cares when they are as popular as they are?

Falafels made from chickpeas and fava beans, combined with spices and wheat, and then fried. They serve in pita bread with salad. Due to their similarities, you could call falafel the ‘vegetarian gyros.’

How to Make Frozen Yogurt at Home?

Top 10 Organic Diet For a Healthy And Sustainable Lifestyle