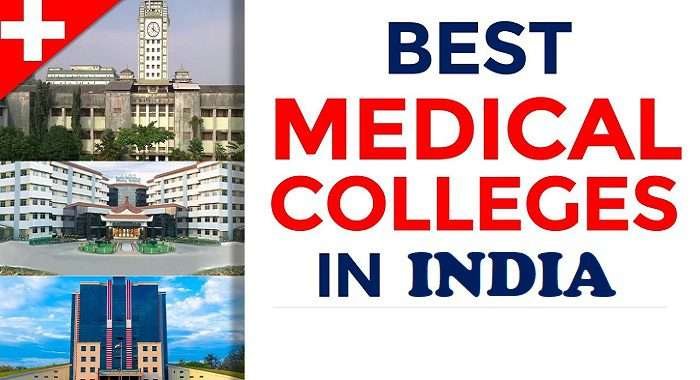 Do you want to study MBBS in a Government Medical College in India? If yes, then you need to study hard to achieve your goal. The reason is a huge competition for government medical seats in India, as the fees for private medical colleges are high.

Here, we have listed the top 10 government medical colleges in India for your reference. This list is decided on the basis of different factors such as quality of education, students’ crowd, refereed publications, academic productivity, research output, industry interface, etc.

Now, let us have a look at the top 10 government medical colleges in India with their rankings:

1) All India Institute of Medical Sciences

The clinical exposures in AIIMS are excellent. The hospitals of AIIMS treat 3.5 million patients every year. The college is known for charging subsidized tuition fees amount.

Apart from these courses, the college has many other courses in various streams such as Anatomy, Physiology, Biochemistry, Nuclear Medicine Technology, Nursing, etc. AIIMS, New Delhi has ranked number one.

The institute also provides super specialist courses apart from Undergraduate and Postgraduate courses. Besides this, the college offers quality medical care to a large number of patients on a daily basis.

The National Institute of Mental Health and Neuro-Sciences is a medical institution located in Bangalore, India. It is an Institute of National Importance operating autonomously under the Ministry of Health and Family Welfare.

NIMHANS is an institute that is ranked as the 4th best medical institute in India in the current National Institutional Ranking Framework.

Sanjay Gandhi Postgraduate Institute of Medical Sciences is a medical Institution located in Lucknow, Uttar Pradesh, that is 14 km (8.7 mi) south of Hazratganj on Raebareli road. The institute was established in 1983 and is named after Sanjay Gandhi.

The institute is spread over 550 acres (2.2 km2) residential campus at Raebareli Road. This institute offers degrees that the National Medical Commission recognizes. It also has tertiary medical care, training, and research, super-specialty teaching.

Degrees are provided at the DM, MD, MCh, and Ph.D. levels and also include postdoctoral certificate courses, postdoctoral fellowships, and senior residency. The college also has degree courses in nursing and paramedical.

The Institute of Medical Sciences (IMS-BHU) is one of the Six institutes of Banaras Hindu University in Varanasi, India. It comprises three faculties: Faculty of Medicine, Ayurveda, and Dental Sciences. Like other institutions that form BHU, it is also a residential and co-educational institute.

The Jawaharlal Institute of Postgraduate Medical Education & Research, also known as JIPMER, is a medical school located in Pondicherry, India.

JIPMER is a tertiary care referral hospital and an Institute of National Importance (INI). It is under the direct administrative control of the Indian Government and the Ministry of Health and Family Welfare, with autonomy to run its internal administration.

JIPMER has over 700 resident physicians, over 300 faculty members, and over 800 nursing, administrative and support staff. Annually it can admit 150 undergraduate students and 200 postgraduate students.

The University has about 1250 undergraduate students, which include 280 dental students and 450 postgraduate students. About 250 students per year get admitted to the four-and-a-half-year course of study for the degree of MBBS at King George’s Medical University.

Sree Chitra Tirunal Institute for Medical Sciences and Technology (SCTIMST), formerly known as Sree Chitra Tirunal Medical Center, was established in 1976 and is an independent medical school and an Institute of National Importance in India located at Thiruvananthapuram, Kerala.

The institute is named after Chithira Tirunal Balarama Varma, the last Maharajah of Travancore, who gifted the building. SCTIMST is one of the most prominent research Institutes in India.

The Government General Hospital, Chennai, is one of the premier Institutions in the country. It started its execution on November 16, 1664, as a small Hospital to treat the sick soldiers of the East India Company. It was started by Sir Edward Winter at Fort St. George. Then, on October 1, 1850, Medical School was named Madras Medical College.