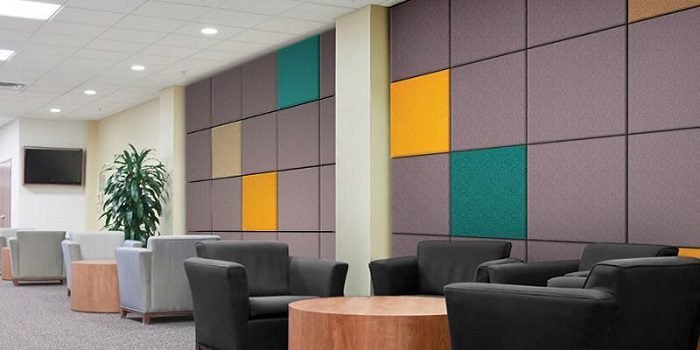 It won’t be an exaggeration to say that many designers flee from the term ‘acoustic’ like a plague. Acoustic wall panels were considered distasteful aesthetic elements because they do not blend well with the interior. However, that’s not the case anymore.

With the advent of new architectural technology, acoustic design is becoming a roar among its haters. Here’s how acoustic designs have gone from ‘nay’ to probably the year’s ‘it’ interior design technology.

What is Acoustic Design?

Acoustic design focus on the elimination of voices. Acoustic interior absorbs or scatters sound to reduce the noise level in a space.

The science of acoustic was founded by Wallace Clement Sabine, an American physicist, in 1868. This architectural technology is usually employed in spaces like offices and opera houses to eliminate unkind voices to the ear and enhances legible hearing.

Prior to Sabine’s discovery, architectural designs were usually based on intuition to enhance the audio quality of any space. Sabine’s work defined the dynamics of acoustic, which continues to be an unexplored architectural arena.

Ever since the 18th century, the field of architectural acoustic has gone through countless evolution. You can experience this transformative architecture in the various acoustic spaces built over the past two centuries.

A few examples of popular acoustic spaces are given below:

Boston’s Symphony Hall is the first building to incorporate architectural acoustic in its design. It’s also one of the most beautiful concert halls globally.

According to a study in 2014, sound distraction can reduce the efficiency of an employee by 86 minutes a day. Later in the year, Facebook revamped its entire headquarters, redefining office spaces. Each employee had a private space, and every shared/communal space incorporated acoustic wall panels.

Facebook’s 40,000 square meters renovated office was said to be “the biggest revolution in architecture since the invention of steel, concrete, and the elevator.”

Then, more and more offices started incorporating acoustic architecture in their office. While acoustic architectural started with the need to amplify the hearing capacity of spaces, it has evolved to create comfortable and practical spaces. Today, acoustic designs emphasize privacy more.

Working spaces are embedded with moderate CACs or NRC ratings to reduce distracting sounds. Architects continuously work round the clock to balance and configure aesthetics and acoustics in office spaces.

While many businesses chase after industrial aesthetics, concrete ceilings, and open plenums, these structural designs do not serve the concept of ‘privacy and amplifying loud voices.

While such interior arrangements were impossible to achieve earlier, this is not the case now. Any interior design course graduate would recommend quality acoustic ceilings and walls to help you achieve these elements without having to scratch anything off your bucket list.

A textbook example of this innovation is Museo del Acero, a steel plant in Monterrey, Mexico. The entire structure is based on sound-absorbing technology. The building was a former steel factory featuring metal, gypsum board, glass, and concrete.

You will be surprised to read this, but with just a mere sound treatment installment in the central oculus of the building, it was turned into a comfortable social space.

Acoustic architecture has evolved to be more than just a material mask for unwanted noises. Instead, it’s dynamic and serves the purpose of ‘privacy’. Unfortunately, this architectural field is marketed as ‘shush’ technology and thus remains an area of much experimentation.

How to Make Turbine Seal Clearance More Cost-Effective and Sustainable?